Euless has experienced considerable growth in recent years, much like many other 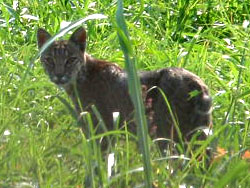 There are some obvious effects of growth, such as the increased demand for water, sewer, streets, schools and roads. There are other, more subtle effects from growth that also impact City services. One of these is the demand on Animal Services.

Until recent years, much of Euless consisted of large, wooded, vacant tracts of land. These areas were heavily populated with coyotes, foxes, bobcats and snakes, along with a variety of small game animals and varmints. These animals were able to live relatively undisturbed and were only occasionally seen by residents on the fringe of the woods.

As development began to encroach upon these native areas, the animals' territories shrank. Of course, a natural result of that encroachment has been an increase in animal sightings by humans in developed areas.

Texas Star Golf Course is a good example of beautiful development in previously rough, wooded terrain. It is also an example of wildlife living in harmony with development. During daylight hours, the native Texas Star "residents" are rarely seen. However, at dusk and dawn these residents make their appearance. A family of bobcats can often be seen on a fairway. Coyotes are commonly seen and heard. In spite of the animals' presence, Texas Star General Manager Glenda Hartsell-Shelton reports that there have been no reported conflicts between patrons and animals.

Residential development has also resulted in new homes and apartments in close proximity to animals' native habitats. Animal Services Supervisor Larry Atkinson states that calls to Animal Control regarding reported sightings of coyotes, bobcats and raccoons have increased in recent years. Efforts to trap these animals have not been productive. Mr. Atkinson says that Animal Services Officers have never been able to trap a coyote. However, he also states that there have been no reports of bites or attacks from any wild animals. They state that the animal's natural avoidance of humans plays a large part in this.

Euless Animal Services Officers recommend that residents not approach wild animals. Try to avoid leaving pet food outside at night. If you see an animal acting in an odd manner, please contact Animal Services at 817-685-1592. These animals are an interesting and beautiful part of our Texas heritage. Enjoy them as you see them. Leave them alone and they will leave you alone.